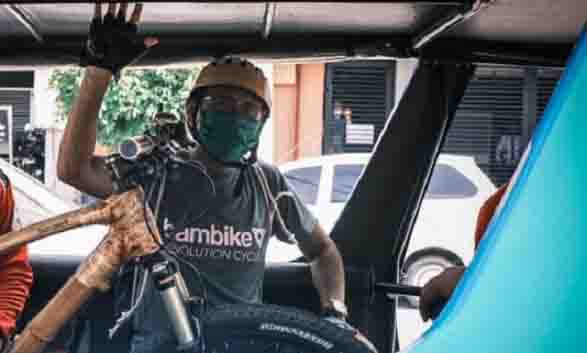 Journalist Howie Severino was apprehended for pulling down his mask to take a drink. On his Facebook page, Howie said he was biking with two of his friends and stopped somewhere in Mother Ignacia. They decided to bought some drinks and pulled down their mask to take a drink.

Three vehicles of QC law enforcers arrived and told Howie that he was talking without my mask covering my mouth and had to be brought to Amoranto Stadium for a seminar.

On Facebook, Howie gave his narration as to the incident:

“To set some things straight, because those who briefly detained me during my bike ride have been getting bashed unnecessarily: I had been biking early this morning with 2 bambike buddies, Chris Linag and Jilson Tiu, in QC for about an hour when we stopped at a bike shop on Mother Ignacia where we ran into Luis Liwanag, famed photojournalist and fellow cyclist, who took the photos of the incident. We were all wearing masks. We bought drinks at the store next door, and drank them after pulling down our masks below the mouth (because we have not learned to drink yet with masks on).

We were all outdoors where the risk of infection is much lower than indoors and maintained at least four feet distance from each other. I had just finished my drink and returned the bottle to the store before I could pull my mask back up, when at least three vehicles of QC law enforcers arrived to tell me I was talking without my mask covering my mouth and had to be brought to Amoranto Stadium for a seminar.

They allowed me to bring my bike and we loaded it into the vehicle that brought me to the stadium where hundreds of people rounded up were already there. I explained to a group of QC employees there that as a recovered patient who had already tested negative three times for the coronavirus and positive for antibodies since my discharge from the hospital, the risk of me infecting anyone is near zero. Nevertheless I still wear a mask.

I am kind of glad that as QC is an epicenter of the disease in the Philippines, they are finally doing something, even if it’s a bit draconian. I even offered to give a talk at the seminar. Instead they returned my bike and told me I could go home.

For the record, after I got sick and even wrote about it and did a documentary about my experience as a patient, the QC LGU did not interview me about my contacts or do any tracing, and did not test anyone in my family or any of my close contacts. I did contact tracing on my own. Aggressive contact tracing has been proven in other countries to be a key to success in this pandemic. I am assuming their intent in taking people to a mass gathering in a stadium is to control the spread of the infection and save lives.

I have followed all other safety protocols including a long isolation and quarantine after my discharge from the hospital, until I was officially declared a recovered patient. I have donated plasma for gravely ill patients. I’m very grateful that no one I was in contact with got infected. I’m a lucky person who has gone back to doing things I like to do, including early morning bike rides.”