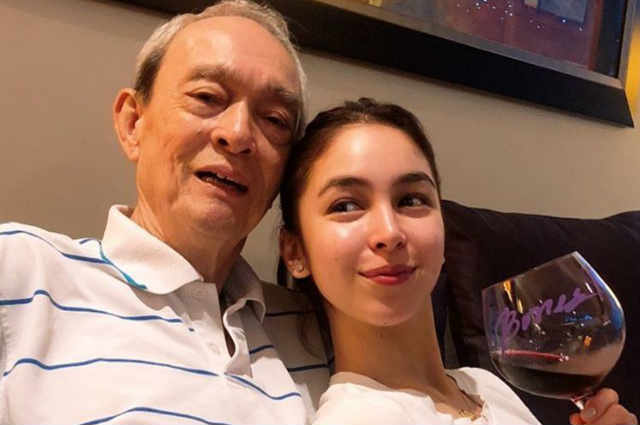 Actress Julia Barretto, together with her mom Marjorie Barretto, had the chance to spend time with her grandparents and some of her relatives over dinner during a small gathering.

In photos shared by Marjorie on her Instagram account, Julia was spotted having a sweet moment with her grandfather as they bonded together with their family members.

Julia Barretto on Joshua Garcia amid break up: “I will love that guy until my last breath”

WATCH: Julia Barretto, all smiles during trip in Hong Kong with friends

Julia Barretto says she is moving on to the ‘next chapter’

Sushi, wine, cheese and Christmas songs. A peaceful Sunday with the family❤️

It can be remembered that there has been a long standing rift among members if the Barretto clan including sisters Marjorie, Gretchen Barretto, and Claudine Barretto.

Their parents had previously sided with Claudine amid her then rift with Gretchen back in 2013. But just earlier this year, Gretchen and Claudine reconciled and have been in good terms since then.

The two later made several claims against Marjorie and just recently, Gretchen and Claudine have been making indirect comments about Julia’s involvement in the rumored break up of Gerald Anderson and Bea Alonzo.

Gretchen and Claudine have openly expressed heir support to Bea and even sent her flowers during the height of her reported split with Gerald.

Later, Julia released a statement and denied her involvement in the issue through an Instagram post. Gretchen then claimed that Julia’s side hired a ‘ghost writer’ which further sparked the feud between her and Marjorie.