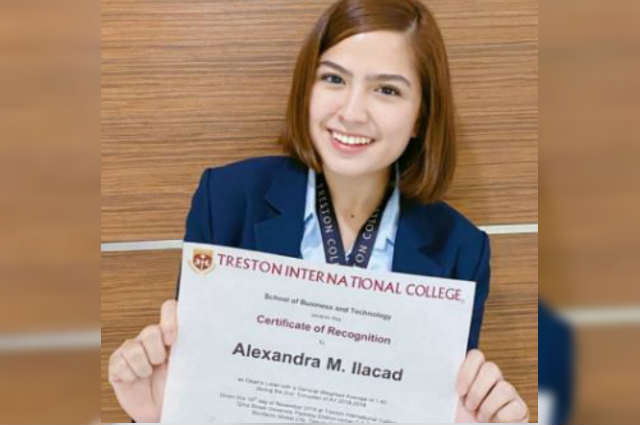 Amid facing controversies involving her past relationship, actress Alexa Ilacad proudly shared one of her recent achievements in school as she was named as one of the Dean’s Listers.

In her social media account, Alexa expressed her joy over her school achievement and thanked everyone who helped her while juggling her studies and work.

Nash Aguas trends online following Alexa Ilacad’s statement: “In those 13 years, where was I?”

Alexa Ilacad reveals rift with Sharlene San Pedro: “I thought we were friends”

She wrote: “Didn’t think I’d be able to do it again because of my crazy schedule but yay! So thankful for my lovely classmates and teachers who helped me every step of the way.”

“Another blessing. Dean’s lister for the second time. Thank you, @trestonph. To God be the glory,” she wrote in a separate post.

Alexa is currently studying in Treston International College and is also starring in the Kapamilya series ‘The Killer Bride’.

Just recently, Alexa made it to the headlines after sheopened up about her past, unofficial relationship with Nash Aguas and allegedly experiencing bullying from some of her ‘Goin’ Bulilit’ co-stars.

She said in one of her interviews: “I was really hurt, pinaka-hurt kay Sharlene [San Pedro] because I thought we were friends. We were okay. Good kami. And then, ayun, nagulat ako one day na, ‘ano ‘to?’ Inaaway nila kami ni Jairus [Aquino], pinagtutulungan nila kami. So, sabi ko, ‘saan ito nagsimula?’ And then I found out na … inutusan daw ni Nash [Aguas] si Sharlene na gawin ‘yun.”

Sharlene recently said in an interview that she reached out to Alexa but she was not ready to make amends.