Anne Curtis gets ecstatic in her interview with Dua Lipa 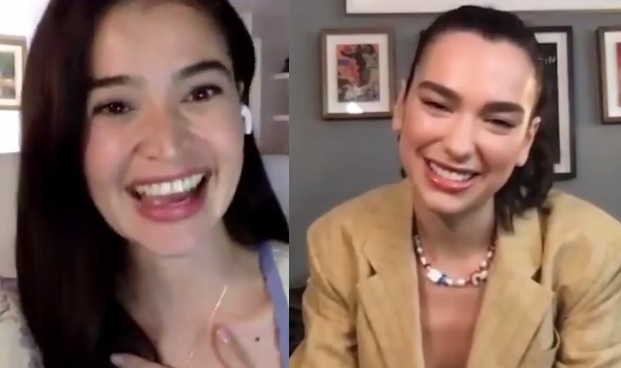 Actress Anne Curtis got one of her dreams come true – to interview British pop star Dua Lipa. Anne was tapped by Warner Music Philippines to interview the “Don’t Start Now” hitmaker and Anne can’t help but be ecstatic. Anne is a self-confessed fan of Dua Lipa.

During the said interview, Dua Lipa said that there will be some collaborations coming soon on the ‘Future Nostalgia’ deluxe.

“I’m working on putting out the deluxe version of my record next year. You might hear some unexpected collaborations, that you haven’t heard before.” said Dua Lipa.

On Instagram, Anne posted the interview with the following message:

Can’t believe this happened! Was given the chance to speak to @dualipa about her album Future Nostalgia and her upcoming virtual concert Studio 2054 🦋 I was so nervous.. as you all probably know, I’m a huge fan.

Ahhh. She was so kind and sweet. Oh and it took everything in me to NOT sing Pretty Please when she mentioned it! 😂

So, Pretty Please watch the interview and be sure to catch Studio 2054 on SATURDAY, November 28 at 5:00pm. She has so much in store for us + surprises too! Can’t wait!!! See you (virtually) there guys. For info and tickets visit dualipa.com/studio2054

Thank you @warnermusicph for this opportunity”