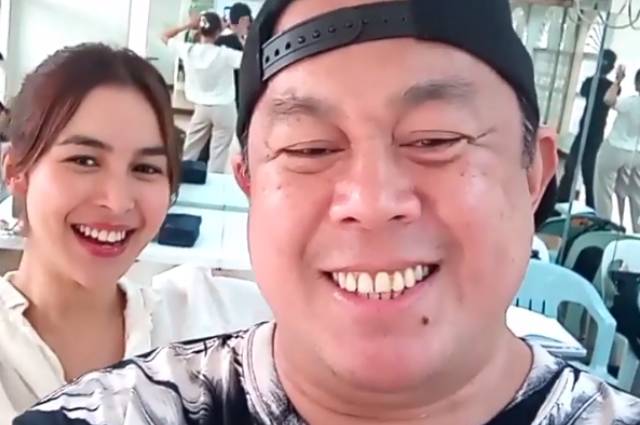 Actress Julia Barretto was honest enough to admit that she is not yet ready to forgive his father Dennis Padilla. Julia and Dennis has a love-hate relationship. One day they are good, another day they will have some misunderstanding.

In an interview with Karen Davila, Julia narrated how is her relationship with her dad Dennis.

“I’ll be very honest, we have not spoken, and it’s because there’s just so much fear inside me now, if I’m being very open. I’m just really scared because I feel, like, over the years, it’s been a cycle of making up and getting hurt and then making up and then getting hurt.” started Julia.

“You know, I kinda just want to huminga lang muna from that cycle. And, you know, I’ve just been praying also na, I don’t know, maybe in God’s time and way na, you know, mag-meet kami in the middle without having to get hurt again.” Julia added.

Karen asked Julia if she has learned to forgive her dad.

“I think, it’s not difficult for us to forgive, but it’s difficult to really just… It’s not the forgiveness, it’s to forget. But there’s just a lot of fear because I don’t know what’s gonna happen. But forgiveness, of course, definitely, that’s my own peace of mind, di ba?” said Julia.

“Hindi ko ipagkakait ang forgiveness but I’m just not ready. I think, there’s just been so much pain over the years since I was young, so parang I got tired of the same thing.” Julia added.

“I won’t lie, I mean, he’s tried. I’m just really not ready and ayokong… I don’t wanna force myself also. Because if you force yourself, then it’s not genuine, hindi siya totoo. So, I wanna get to a point na when we speak, it’s when I’m ready.” Julia said.