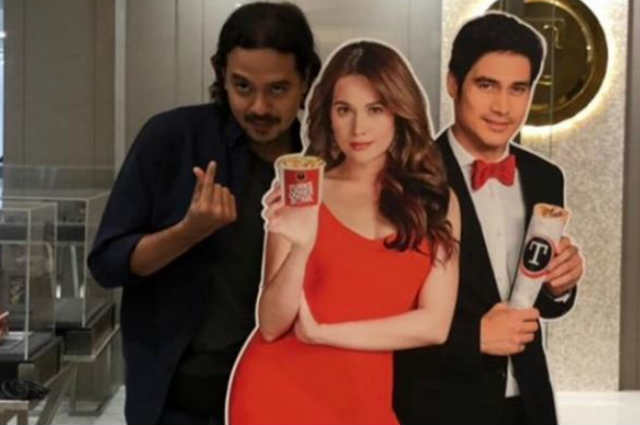 Actor John Lloyd Cruz has been more active online as he gives updates to his delighted fans through his Instagram account.

In one of his recent Instagram posts, John Lloyd surprised his followers as he shared a photo of him while flashing a finger heart beside the standee of his former love team Bea Alonzo and actor Piolo Pascual.

It can be remembered that John Lloyd recently reunited with Bea and Piolo as the three of them were introduced as endorsers of a shawarma brand.

John Lloyd even starred in one of the shawarma brand’s video ads which marked his first ever comeback following his indefinite leave from showbiz in 2017.

Meanwhile, John Lloyd recently made it to the headlines after he directed the newly released music video of Filipino pop band Sugar Hiccup titled “Saturnine Nevermore”.

John Lloyd made an appearance in the music video as he artistically compiled some clips from his travels from September to December 2017.

John Lloyd shared in his Instagram post: “The most obvious reason for the title is that it’s they’ve decided it’s their last as a group.
The band wants to conclude their story their way.
This is the first video that Sugar Hiccup has ever made. It is also the first one that I’ve made.
I am sure this is not the last.”