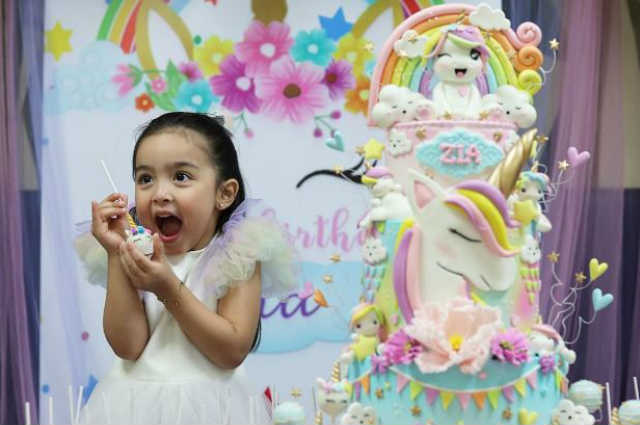 Zia Dantes, the daughter of Kapuso prime time king and queen Dingdong Dantes and Marian Rivera had a colorful birthday party a few days before she turns 4 years old as her mom prepared a unicorn-themed party attended by some of her friends.

In photos shared by Marian on her Instagram account, Zia who was wearing a white and pastel-colored dress was all smiles as she posed beside her lovely cake decorated with rainbows and unicorns.

She also posed with the performers dressed up as Disney princesses along with Marian who expressed her joy for seeing her daughter happy with the party she prepared for her.

Marian wrote in her post’s caption: “Mama is so happy when I see you happy. This genuine smile of yours is priceless!
Love you Ate Z! 💕”

Mama is so happy when I see you happy. This genuine smile of yours is priceless! Love you Ate Z! 💕

Some celebrities also greeted Zia on her special day including Meg Imperial who commented in Marian’s post, saying: “So beautiful 😍 happy birthday Z! :)”